It had been thirty years since the beginning of the Ulster Plantations when in 1641 the native Irish, with the help of the Hiberno-English, rose in rebellion and attacked the settlements of Anglicans and Presbyterians in Ireland. The areas of Antrim, Down, Armagh, Fermanagh, and Enniskillen which had been extensively settled by Scots in Ulster felt the full wrath of the rebellion.

Unlike the native Irish and the earlier Anglo-Norman invaders of the 12th century who were both Roman Catholics, the Protestant settlers espoused an uncompromising Calvinism with an emphasis on Puritan values which reinforced the the growing Puritan, anti-Royalist and anti-Roman Catholic movement in England under Charles I.

The Ulster Rebellion became a war that lasted ten years and was directly related to the conflict between Charles I and the English Parliament. 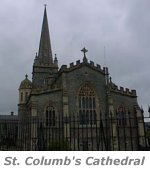 From their beginning, the Irish Rebellion and the English Revolution were intertwined, however Ireland was much more divided than was England. Both Charles I and Parliament denounced the Irish uprising, but both were too occupied by domestic matters to come to the aid of the Protestant settlers.

In Ireland the English forces were split down the middle with those loyal to Charles holding Dublin and the Pale, while Parliament supporters held Derry city and part of the surrounding area. Even the religious divides were often confusing, with some Presbyterian settlers joining the Irish uprising over their own oppression by the Anglican Church of Ireland. The Royalist forces contained many Catholics as well as Protestants, and many of the Catholic Anglo-Irish gentry had allied uneasily with the rebels.

The goal of the Irish rebels was, of course, to turn out the Protestant settlers from Ireland, regain the estates confiscated by the Plantations, overthrow English rule in Ireland, root out and remove Protestantism, and to secure freedom for the Roman Catholic faith.

Beginning in Ulster on 22 October 1641, the rebellion had spread throughout Ireland by the spring 1642. Protestant settlers were evicted from their lands, their farms were burned, their cattle stolen, and many settlers killed. Key strongholds were captured or besieged by the insurgents, and gruesome reports of wholesale massacres and atrocities provoked fears of an international Popish conspiracy across England and Scotland. 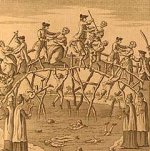 Stories spread of terrible violence against men, women, and children who were murdered, drowned, and burned alive. The more famous stories include the slaughter of a large number of Protestant families at Portadown. Although some of the stories told have been dismissed as exaggeration, there is little doubt from the extensive records of the time that the rebellion was a bloody one to which some scholars have estimated the death toll of settlers bewteen 10,000 and 15,000.

This is perhaps the most famous account of the violence associated with the Rebellion of 1641 and is recalled to this day on the banners of some Orange Lodges during their parades.

The following account is taken from records from the time found at Trinity College, Dublin.

And as for this deponent and many others that where stayed behind, diverse tortures were used upon them….. and this deponent for her part was thrice hanged up to confess to money, and afterwards let down, and had the soles of her feet fried and burnt at the fire and was often scourged and whipt….

And a great number of other Protestants, principally women and children, whom the rebels would take, they pricked and stabbed with their pitchforks, skeans and swords and would slash, mangle and cut them in their heads and breasts, faces, arms, and hands and other parts of their bodies, but not kill them outright but leave them wallowing in their blood to languish and starve them to death.

Sir Phelim O’Neill seized Charlemont, and soon after captured Dungannon, Castlecaulfield, Newry and Lurgan. On his march from Newry to Armagh in 1641, Sir Phelim O’Neill ordered Mulmory MacDonell, ” . . . to kill all the English and Scots within the parishes of Mullebrack, Logilly and Kilcluney”.

The Civil War in Ireland meant conflict with Scotland, which was a traditional ally against the English. On the 8th. February 1642, a Covenanter army lead by General Robert Monroe was sent from Scotland with a large force to quell the Ulster rebellion.

The rebels called themselves the Confederate Catholics and were divided into two groups with very different ambitions. The Old English would have been happy to agree on fairly modest terms with King Charles, as they were afraid of losing their lands, while the Irish exiled following the Nine Years War, along with Cardinal Rinuccini in 1645, insisted on the restoration of confiscated lands and full recognition of Catholicism.

Owen Roe was a nephew of Hugh O’Neill, ‘Earl of Tyrone’, who fled after the Nine Years War in what has become known as, “The Flight of the Earls”. Owen Roe was a young man at the time of the Flight of the Earls and had fought in that last disastrous fight at Kinsale. Owen had fled with the Earls and later won distinction as a military commander in the Spanish Netherlands. Arriving near Donegal on the 6th July 1642 with a hundred officers in his company, Owen Roe was given command of the Northern Irish army.

In June 1646 Owen Roe O’Neill fought and won a great pitched battle resulting in his famous victory of Benburb. In the beginning of June 1646, General Monroe was caught at the River Blackwater at Benburb. Though the Scots were superior in number to the Irish, the Irish had the advantage of position and the Scots were completely overwhelmed. Monroe was fortunate to escape, and the remaining Scottish forces were sent scurrying into the two strongholds of Derry and Carrickfergus. 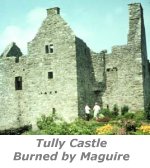 It was the greatest and most annihilating victory in arms the Irish ever won over the British. Unfortunately the fruits of this were frittered away by the Supreme Council in futile negotiations with the Marquis of Ormonde, and by divisions among the Catholics. O’Neill, backed by Rinuccini, wanted to cease negotiating and fight both the Puritans and the Royalists, but the Pale Catholics were more in agreement with Ormonde than with O’Neill.

The uprising was planned several weeks in advance by O’Neill, Rory O’Moore, and Conor Maguire, the second Lord of Enniskillen. Each leader would attack the local garrisons on October 23rd, and a selected group including Conor Maguire would capture Dublin Castle and its armoury. Conor used his position as Lord Enniskillen to provide reconnaissance of the castle prior to the rebellion. News of the plan to take Dublin Castle was leaked to the authorities, and Lord Conor and his men were captured and imprisoned in Dublin. In 1642, he was taken to London and held in the Tower. The second Lord of Enniskillen was tried for treason and found guilty. He was hanged and beheaded at Tyburn in February 1644.

The rebellion in Fermanagh was more successful. One of the principal leaders was Rory Maguire, brother of Conor, Lord of Enniskillen. Rory Maguire’s forces in Fermanagh continued with the campaign as the second phase of the bloody rebellion saw large numbers of ordinary Fermanagh people engaged in all-out war with the Protestant settlers.

Rumours of atrocities in Fermanagh circulated as did those of Portadown;

“The Last True Intelligence from Ireland; Being A true Relation of the great Victory lately obtained against the Rebels by Sir William Stewart, Colonell Sanderson, Colonell Mervyn, and Sergeant Major Galbraith, against the great Oneales and MacGwires Forces, wherein they slew great numbers of the Rebels, tooke 900 Cowes, 500 Sheep, and 300 Horses from the Rebels in the County of Fermanagh… That the present troubles, dangers, and calamities which at this perilous time we are in are so great, that this whole Kingdome is much distorted, distracted, and disturbed. That the rebels are so many in number that we alone are not able to resist them. That the Rebels tyranny is so great that they put both man woman and child to the sword, not sparing either age, degree, or sex or their reputation. …”

On November 13th 1648, Rory Maguire was killed leading an attack on a fortress near Carrick-on-Shannon. Bishop McMahon was captured and hanged in Enniskillen, while Sir Phelim O’Neill was also captured and hanged. By August all resistance in Ulster had finally come to an end when their last stronghold at Charlemont Fort surrendered. The following year Oliver Cromwell and his army landed in Ireland and was greeted by the roar of cannons from the walls and a great, enthusiastic crowd.

The war in Ireland continued after Cromwell’s return to England with sporadic guerrilla fighting for another six months, finally ending with the surrender of Galway to Sir Charles Coote on 5 April 1652, and later with Philip O’Reilly surrendering in April 1653. By then the Cromwelliam Settlement was well under way.